TWO British men were part of a drugs gang which shot dead a 12-year-old Dutch schoolboy by mistake after they were sent to kidnap members of a family believed to have stolen a huge batch of cocaine.
A Dutch court has sentenced half-brothers Alistair Weekes and Tyrone Gillard to 20 years in prison along with a third defendant, Dutchman Marcellino Fraser, after 12-year-old Danny Gubbels was shot dead in Breda, Netherlands in July 2010.
The trio were part of a seven-man team which arrived at the Gubbels static caravan home in Breda with the intent of kidnapping John Gubbels, father of Danny, according to court records. They had been sent by their crime bosses, to resolve the issue of a missing 400 kilos shipment of cocaine from a container in Antwerp in 2010.
On the evening of July 14th 2010, the gang banged on the door of the Gubbels’ home with no response. Shortly after, several members of the gang began opening fire believing the house was empty. But inside Danny was playing computer games at the table with his mother nearby. Both were hit by fragments of rounds which ricocheted around the building in a 20 second burst of automatic fire in which 27 rounds hit the Gubbels’ home. 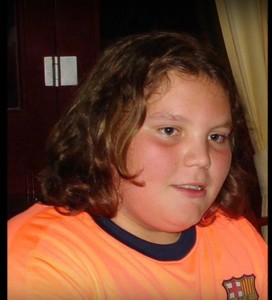 While Danny’s mother survived the firearms onslaught after diving onto the floor, her son’s vital organs were hit by a ricochet. A fragment of a round penetrated his liver. He died in hospital from his wounds later the same night.
It transpired, the crime scene had been under police surveillance for a number of weeks prior to, and at the time of the shooting. Dutch crime investigators were probing the Gubbels family links to cocaine smuggling. Police camera images showed the men in balaclavas arrive in a transit van before approaching the door of the Gubbels house and attempt to gain entry and then begin firing.
Police traced the gunmen after the van they used in the raid was discovered and DNA samples linked Weekes, Gillard and Fraser to the crime scene. An initial prosecution against the trio in 2013 resulted in only Gillard and Fraser being convicted and sentenced to 16 years in prison. But prosecutors appealed the case and Weekes was also convicted with the sentences raised to 20 years for all three defendants in a ruling last week. At this hearing Tyrone Gillard had admitted to driving the gunmen to the scene of the shooting in Breda. Fraser and Weekes denied being part of the gang but DNA evidence on a number of items seized from the van linked them to the crime scene. Investigators have been unable to identify at least four others involved in Danny Gubbels’ death.
Weekes, 34 and Gillard, 29, both from Leeds born to the same mother but different fathers, were known to police in the UK. Weekes was arrested by officers from the then Serious Organised Crime Agency (now the National Crime Agency) in Armley prison, Leeds on a European Arrest Warrant in 2011. He had previously been convicted of shooting his half-brother Nathan Williams by mistake after a sawn-off shotgun they had been “messing around with” went off in December 2001.
The two claimed they had been given the gun by another man while they were behind a takeaway food shop in Armley, Leeds. Williams’ life was only saved by the skill of medical staff.He went on to make a full recovery. Weekes, then a 20-year-old, was sentenced to four years in a young offenders’ institution.
Tyrone Gillard was arrested by a team of Dutch SWAT officers in Amsterdam, where it is understood he had been living for at least a year. In court, few details have emerged about the power-base behind those hired to resolve the debt.
One person of interest, identified by Dutch investigators as an investor in the cocaine load which was stolen, was a man named Samir Bouyakhrichan. Samir went by the nickname “Scarface”. The Dutch-Moroccan was believed to be one of Europe’s biggest drugs kingpins and had previously been linked to a huge haul of cocaine in Southampton in 2011.
Bouyakhrichan was arrested in connection with the Gubbels murder enquiry and was extradited from Spain to Netherlands on a European Arrest Warrant in March 2012. Dutch investigators quizzed him but courts ruled there was not enough to prosecute him. He was released within a week. He was dead within two years. Gunned down late at night in a Benahavis cafe near Marbella, Spain in August 2014, Bouyakhrichan, 36, was yet another victim of a violent power struggle which is ongoing in the Dutch underworld.
One question has taxed the minds of Dutch prosecutors in this case. Why would English criminals be tasked with a job in the “flat place” unless there were English interests to be protected.
A Dutch source with knowledge of the investigation said: “We believe that the death of Danny Gubbels was linked to a stolen batch of cocaine which a member of the Gubbels family had ripped from a bigger organisation. The gang may have been told to kidnap a family member to demand their goods or money back but it went wrong and Danny tragically paid the price for this. The use of a number of English gang members in this would indicate that there was some British interest involved.”
Danny’s father John Gubbels and his eldest son were both convicted of cocaine trafficking after 130 kilos of the drug were discovered in a police raid after Danny’s death.