A MAJOR figure in the Dutch underworld was gunned down last night in a surburb of Amsterdam.

Gwenette Martha, 40, died in a hail of bullets after three gunmen dressed in balaclavas unleashed a volley of automatic fire as the Dutch crime lord was walking in the Amstelveen district of Amsterdam in the mid-evening. The gunmen may have sped off in a BMW which was later found burnt out, according to some reports. Martha was pronounced dead at the scene, punctured by at least 80 bullet wounds, according to reports in the Dutch media http://bit.ly/1kpsf7x . The assassins were believed to have used AK-47 automatic rifles in the attack. 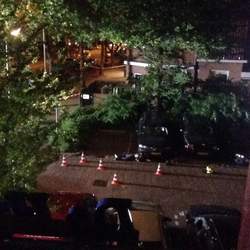 The scene of Martha’s execution

Martha, had been linked to the Dawes cartel, headed by British criminal Robert Dawes, as far back as 2002. Martha was one of five men who visited the home of 52-year-old Gerard Meesters in November 2002 to threaten the school teacher to tell them the whereabouts of his sister Janette Meesters. The Dawes Cartel believed that Janette and a friend had stolen a large quantity of drugs belonging to Robert Dawes. A few days after the encounter with Martha, Mr Meesters, a complete innocent who had not been in contact with his sister for years, was shot dead in the hallway of his home in Groningen, Netherlands. Dawes Cartel member, Daniel Sowerby, was jailed for life for the murder and Martha received a prison sentence for supplying heroin to Sowerby and for threats against Mr Meesters in the days before the murder.For the past year the lucrative cocaine and heroin trade has been been at the fulcrum of an Amsterdam gang power battle; it has culminated in a series of fatal tit for tat shootings involving two major groups of criminals. One group was headed by Martha supported by a biker gang. Martha had been suspected of ordering the murder of two rivals in 2012 linked to a shadowy Moroccan mafia group. A series of thefts of large shipments of cocaine are believed to have increased tensions between the two groups. In December last year Martha himself survived an assassination attempt when a gunman jumped out at him but the assailant’s weapon jammed.

Martha himself had only recently been released by police after being arrested in April over the possession of two firearms. Observers and law enforcement in Netherlands fear the death of Martha may now provoke an escalation in the war which could see the recent bloody drug war in the country reach unprecedented levels of violence. 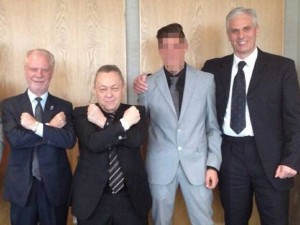