EARLIER this year I wrote about the case of Robert Dawes , head of an organised crime group which has left a trail of devastation in its wake through its activities over the last 10 years.


Dawes was finally arrested in Dubai on an International Arrest Warrant issued by the Spanish authorities and flown to Madrid in May this year. It seemed as though the law enforcement agencies had finally managed to get their man after countless investigations against him dating back more than a decade spanning Holland, Belgium, Dubai, Spain and the UK.


The Spanish were “cock-a-hoop” over the arrest to the extent that they issued a statement saying, in targeting Dawes, they had seized millions of pounds worth of drugs including 5.7 tons of cannabis resin, 100 kilos of heroin, 210 kilos of cocaine as well as four firearms, 5.4 million pounds’ worth of property and 90,000 pounds in cash. They described Dawes as “the boss of one of England’s most important drug trafficking organisations”.


Dawes was placed in custody in Madrid and prosecutors began to finalise their case which centered on the details of Operation Halbert, the SOCA led operation which focused on Dawes which was set up in 2006 and which had already led to three British men and a Columbian being jailed for between seven and half years and eight years in the Spanish courts after 187 kilos of high purity cocaine was seized near Madrid.


Then on September 12 in Madrid a strange thing happened. Dawes was suddenly released from custody by a Spanish judge presiding in Court 32. The officers at the head of the Guardia Civil elite Central Operative Unit which had targeted Dawes were not informed of his release and even a week later the UK’s Serious Organised Crime Agency (SOCA) were denying that the charges against Dawes had been dropped and that he was at liberty. SOCA argued he had merely been released on bail back to his home on the Mijas Costa. Yet there was no surveillance in place for a man known to have several false passports and who has a penchant for fleeing to countries with no extradition agreements such as Dubai. It has since emerged that one of the reasons prosecutors in Spain offered no evidence against Dawes is that one of his associates – British man Karl Hayes who had been interviewed at length by officers from SOCA while in a Spanish prison – was now refusing to make a statement against Dawes.


Returning to SOCA’s role in this matter; it has a number of serious questions to answer about the way this botched operation has unfolded. An official spokesman for SOCA denied their primary role in investigating Dawes. It was, said a spokesman, a “Spanish operation” which SOCA simply assisted “where required” . That is a strange assertion in itself since, according to documents filed in the Spanish courts, SOCA was the lead agency on Operation Halbert and the main involvement of the Spanish authorities was in making the initial arrests on their soil, seizing the cocaine and subsequently applying for Dawes extradition from Dubai. All the intelligence for the operation came from SOCA including the tracking of vehicles, and if SOCA had no primary role in this investigation why did its officers fly out to Spain to interview one of Dawes’ associates Karl Hayes a number of times?


And what are we to make of the Spanish courts statement on Robert Dawes release. This is what they had to say.
“The Provincial Court in Madrid has revoked the indictment of Robert Dawes issued by the Court of Instruction number 32 and so he is at liberty. The magistrates at the Provincial Court understand that, over and above the important report by the Central Operative Unit (of the Guardia Civil) which is found in the proceedings, it is necessary to wait for a response from the Commission of Dubai, with reference to the searches in the case, and, above all, the Commission of the United Kingdom. When the judicial authorities of those countries respond with evidence the case will be taken up again, but neither of the two commissions has yet commented and there is no indication of when they might do so.”


So in effect Spain is blaming the UK for failing to provide it with the evidence it had requested to keep Dawes in custody.


Robert Dawes has been identified in no less than nine large national criminal investigations in the UK involving large scale drug shipments since 2000. In addition he has been identified by Nottinghamshire Police as the man suspected of commissioning the murder of David Draycott, in Sutton-in-Ashfield, Nottinghamshire in October 2002, a case in which no-one has been charged. Additionally, Dutch investigators have evidence that Dawes sponsored a similar hit against an innocent school teacher, Gerard Meesters in Groningen, Holland in November 2002. As recent as late last year a SOCA document described Robert Dawes as “a highly significant international criminal” and in the prosecution  of Dawes brother John, who received a 24 year sentence for drug supply and money laundering, Robert Dawes was named as the head of the organisation.


When Dutch investigators visited the UK in 2004 to speak to potential witnesses with intimate knowledge of Dawes’ drug smuggling and money laundering operations, those witnesses all pointed the finger at Dawes saying they believed he had ordered Gerard Meesters murder. None would make a formal statement to Dutch prosecutors fearing reprisals. Some went further. Dawes, they believed, was an “asset” who was being protected in some way from prosecution because of the information he held.  A statement they said, implicating Dawes, would not be conducive to their long term health if a prosecution failed. Even police officers who have investigated Dawes in the past are coming to the conclusion that Dawes is a “Teflon Don” to whom no prosecution will stick. Whether this is true or not remains to be seen but the latest twist in the life of this latter day Godfather does nothing to debunk the theory that some hold that Dawes is in some way being protected. At present Robert Dawes’ criminal CV appears to be an example of 11 years worth of clumsy law enforcement work or someone somewhere has been placing spanners in the works deliberately.I am told the Spanish authorities now have no idea where Dawes is. Either way at present Robert Dawes appears to be bullet-proof as far as our law enforcement agencies are concerned and I hear that  he is even lining up a 200,000 Euro claim against the Spanish authorities for wrongful arrest. Priceless. 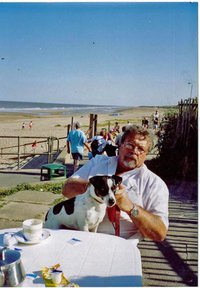 For the past year I have been actively supporting the plight of  a Lincolnshire pensioner who was arrested in Spain after being duped into driving a car which contained £22 million worth of cocaine. Most criminals will tell you they are innocent or have been stitched up and for that reason alone I don’t tend to get involved in miscarriage of justice cases unless there is clear evidence that the person involved is innocent. But I have absolutely no doubt that the case of  Trevor Wade passes that test. Trevor’s plight is detailed in the revised edition of Hoods, so I won’t duplicate those details here but in short, the biggest problem is that Trevor has been held in prison now, without trial, since September 2007. Today I feel an overwhelming sense of anger and sadness after I learned that his lawyer believes a trial may not take place until April 2011. It is frankly shocking that a 66-year-old man in poor health, against whom there is no evidence other than being in the wrong place at the wrong time, can be left to rot in a foreign prison without trial for almost three years. I do not blame the Spanish for Trevor’s plight, they were only following the trail given to them by British investigators at the Serious Organised Crime Agency. SOCA has admitted it has no evidence on Trevor Wade but says it cannot interfere in the judicial process of a foreign power. Ditto the Foreign Office. But the fact is they don’t appear to be doing anything else to resolve the matter either, almost as if to say they would rather it was swept under the carpet than admit when a costly mistake has been made. If this had been a case of a foreign national in the UK then Trevor would undoubtedly be home with his family by now, either because there was no case to answer or through abuse of process rules. Even in the unlikely event he had gone to trial in the UK he would certainly have been given bail until the date of the hearing. At present, he is struggling to survive the regime in Leon Prison where the odd piece of Spanish Tortilla is often the only food he looks forward to eating. If there is anybody out there, either in SOCA or the Foreign Office, who has a conscience I would suggest that now is the time to make yourself known because all the apologies and platitudes in the world are going to mean nothing to Trevor’s family if he ends up living out his last days in that Spanish cell.