DANIEL Sowerby, the man convicted of killing an innocent Dutch school teacher in 2002 has spoken for the first time about his boss Robert Dawes.

In a series of interviews with Dutch journalist Martijn Haas for Panorama magazine, Sowerby now 56, acknowledges he will die in the maximum security Lelystad prison 50 miles from Amsterdam where he is serving a life sentence. 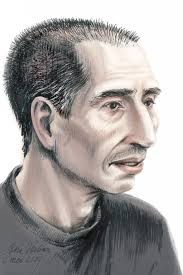 Daniel Sowerby sketched as he is now by artist Petra Urban.

Sowerby, a former heroin addict, cuts a sad figure in the interview. His health is failing and his only friend is a parakeet, which eats all the books he has in his cell. He is asked to cast his mind back to November 2002 when he was dispatched on a mission to a surburban house in Groningen, Netherlands.

Sowerby says he was sent to the house with well known Dutch criminal Gwenette Martha, who he did not know previously and three other men. The purpose of the mission had been outlined in the days previous. Two women, Janette Meesters, sister of Gerard and Madeleine Brussen her friend had absconded with a large amount of drugs belonging to Robert Dawes and the mission was to find these two women by threatening their relatives. Sowerby says he remembers nothing of the day that Mr Meesters was brutally gunned down in the hallway of his home with eight gunshot wounds.

But he admits he accompanied Gwenette Martha, recently assassinated in Amsterdam, four days before Meesters death to hand over a phone number to the teacher and warn him he had to call his boss to tell him where Janette Meesters was.

Sowerby is asked about Robert Dawes. He tells Martin Haas the journalist: “I met Dawes several times. He was just like you or me, wearing tracksuit bottoms and a hoodie. I don’t bear him any ill will even though I am in prison, I’m just glad he is not here to get caught. He is a good man, really! Even if he does have arms dealers, drugs dealers and runners on his payroll, he supports a large network of families with mothers and children to look after. I respect him. He has left me alone so I have nothing to fear from him (Dawes).”

Sowerby goes on to explain how he came into contact with the Dawes Cartel after going on the run from HMP North Sea Camp in 2001. Sowerby lived a hand to mouth existence in France before settling near Breda under the name Andrew Love. He had met some members of the Dawes Cartel already when he had been serving some of his prison sentence. When he reconnected with those people, who included Anthony Spencer, (the Coventry smuggler who tutored Dawes in his rise to the top) Sowerby said he was on his uppers and in the grip of a serious heroin addiction.

“I was an addict and I needed to score money. I already knew some of the big boys from prison. The work I did for them was to courier drugs and things and send messages. I was a runner, that was it,” said Sowerby.

On the day Mr Meesters was murdered, traffic cameras caught, the vehicle Sowerby and his co-accused Steven Barnes, a drugs tester for the Dawes Cartel, as it sped through a red light in Groningen. Barnes admitted his involvement but said that he was just the driver and Sowerby was the shooter. But Sowerby has consistently denied this. But now Sowerby admits he has come to the end of the road in his legal battle to appeal his cases. All avenues appear closed now despite his lawyer demanding that judges bring Robert Dawes and Steven Barnes back before the courts to question them.

The full article by Martijn Haas can be found here http://www.elinea.nl/artikel/britse-crimineel-daniel-sowerby-zucht-levenslang-in-nederlandse-cel