A CRIMINAL network working under the orders of organised crime boss Robert Dawes has been jailed following a joint police investigation into the large-scale movement of cocaine and amphetamines.

Dawes trusted footsoldiers, Christopher Turton and Dale Wright, were part of a Nottinghamshire cell working for the Spanish-based crime boss. Dawes, a former Sutton-in-Ashfield resident, is currently in custody in France awaiting trial for a 1.3 tonnes load of cocaine seized at Paris’ Charles De Gaulle airport in September 2013. 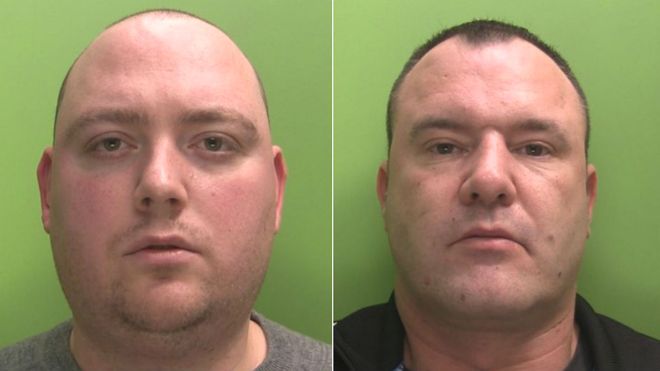 This week, Turton and Wright were among 13 people convicted of drugs offences and money-laundering. Turton received a 10 year sentence and Wright, previously a target of police investigating Robert Dawes, received a 6 year and 8 month sentence

Police discovered Turton, had himself been subjected to a punishment shooting after sending a courier with more than £100,000 down the M1 only to be stopped by Leicestershire police officers working on behalf of the East Midlands Serious Crime Unit (EMSOU) and the National Crime Agency (NCA).
The man they stopped was Robert Durant, also of Sutton-in-Ashfield, who was couriering £100,000 to a man in Milton Keynes.

The group used Blackberry encrypted mobile phones and secret compartments in vehicles to launder cash and supply Class A and B drugs around the country, stretching from Scotland to London.

At Stafford Crown Court this week 11 men and two women were sentenced to a total of more than 40 years for the parts they played in one of the illicit operations.

Enquiries into this group began in January 2014, when Nottinghamshire Police flagged-up Christopher Turton and Dale Wright to serious and organised crime specialists at EMSOU.

According to Detective Inspector Andy Jones, of EMSOU, “This was a sophisticated and well-organised crime group which utilised encrypted mobile phones, vehicle concealments and unregulated and untraceable cash transfers.

“Turton and Wright were pivotal in this network, organising and arranging the supply of drugs and the transfer of huge amounts of cash on behalf of an international organised crime group. I cannot emphasise enough that the street value of the seized drugs is exponentially more than what we have valued them at in the prosecution case”

Over eight months detectives evidenced cocaine, amphetamine and cash being moved around the East Midlands, north to Manchester, through to Scotland, south to Warwickshire and Birmingham, and on to Milton Keynes, Banbury and London.”

In order to physically transfer their drugs and cash, Turton and Durant arranged for three specialists, a Brazilian and two Spaniards, to be flown in from the continent to adapt a number of vehicles. These secret compartments were so well hidden, they were only detectable by X-ray.

Rob Hickinbottom, regional commander of the National Crime Agency added: “Dawes was extradited to France in connection with the seizure of 1.3 tonnes of cocaine hidden in suitcases on an Air France flight, and we are continuing to support the French authorities ahead of his trial.”

The proceedings of that trial in Paris will be very interesting.